This vegan, gluten-free white bean shepherd's pie recipe is both tasty and easy to make. With a little planning, you can prepare it in about an hour.

Shepherd’s pie is traditionally made with meat filling and a mashed potato crust. It’s the ultimate cold-weather comfort food and healthy plant-based versions are popular. Some are more complicated than others. This White Bean Shepherd’s Pie recipe is both tasty and easy to make.

How to Make It Easier

This White Bean Shepherd’s Pie requires a few extra steps compared to the quick and easy recipes I usually share. But it’s not difficult.

The trick is to cook the potatoes, cauliflower and veggies for the filling at the same time. This way you can:

With a little planning, you can prepare this warm, creamy, flavorful and satisfying meal in about an hour. 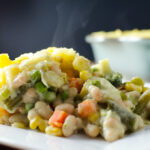 This vegan and gluten-free White Bean Shepard's Pie recipe is both tasty and easy to make. With a little planning you can prepare this satisfying meal in about an hour.
Prep Time 45 minutes
Cook Time 20 minutes
Total Time 1 hour 5 minutes
Servings 10

Cauliflower sauce is adapted from a recipe by Pinch of Yum. Nutrition information is a rough estimate per serving.