A healthier version of a decadent holiday beverage - this vegan eggnog recipe features coconut milk, cashews, dates, and maple syrup in the place of eggs, cream, and sugar for a delicious treat.

Let’s be clear. While this vegan eggnog avoids animal protein and raw eggs, it’s still loaded with fat and natural sugar. This is the stuff that makes it delicious. But you’ll want to pace yourself!

I LOVE eggnog. Back in the day my husband would keep me well supplied between Thanksgiving and Christmas. He’d pick up a carton on his way home from work and I’d enjoy a glass (or two) nearly every evening. I thought I was being good drinking the light version. In hindsight, my “light” eggnog habit definitely contributed to my expanding waistline.

Now I limit my indulgence to special occasions. I’ll have some of this vegan eggnog on Christmas Eve. But don’t imagine I let this batch go to waste. YUM!

I sorely missed eggnog the first holiday season after I switch to a plant-based diet. I tried a carton of “rice nog” but it was as disappointing as the name suggests. It took me a couple of years to try making my own plant-based version. Happily, the results were much more satisfying!

This vegan eggnog is:

Eggnog is traditionally spiked with rum. I’m not particularly fond of rum.

Cinnamon whiskey, however, is a guilty pleasure I enjoy on occasion. If you are concerned with the ingredients in the popular Fireball brand, you might want to explore other options, including making your own! I haven’t tried the DIY version—but I plan to!

The spicy kick of cinnamon whiskey combined with the creamy sweetness of this vegan eggnog is especially pleasing. Enjoy! 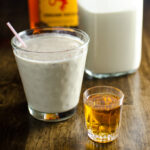 Adjust the amount of dates and maple syrup to achieve your preferred level of sweetness. Prep time does not include the time it takes to soak the nuts and dates. Recipe makes between 5 and 6 cups. Serving size is 1 cup. Nutrition information is a rough estimate per serving and does not include the cinnamon whiskey.