Made with simple ingredients and easy to prepare, this rice cooker vegan lentil bolognese sauce recipe offers a pleasing meaty texture without the meat!

The term “Bolognese” is used to describe a meat-based pasta sauce. So vegan Bolognese is a bit of a misnomer. But it accurately describes the meaty texture of this Rice Cooker Vegan Lentil Bolognese recipe.

I have to confess. I’m usually a jarred pasta sauce kind of gal. You can’t beat the convenience, but the health benefits can be questionable. Even before I went plant-based I avoided jarred meat sauce. Instead I would brown ground turkey, drain the fat, and mix the meat with a simple jarred marina.

Now I typically add dark leafy greens and other veggies to jarred pasta sauce. But lately I’ve been hankering for a meatier texture. I decided lentils would be a good substitute. Instead of simply adding cooked lentils to jarred sauce, I decided to work from scratch.

Why Use a Rice Cooker?

This Rice Cooker Vegan Lentil Bolognese recipe isn’t particularly quick, but it is easy to prepare. It takes about 2-3 hours to cook down to a good consistency. You can prepare it on your stovetop, but I recommend using a rice cooker. The rice cooker allows you to walk away and the beeping at the end of each cycle reminds you to give the sauce a stir.

The lentils provide a satisfying meaty texture while the peppers, onions, garlic and spices meld to create a pleasing flavor. 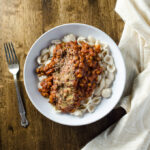 Stovetop option: Add ingredients to a large saucepan or Dutch oven, cover and bring to a boil. Reduce heat and simmer partially covered for 2-3 hours, stirring occasionally, until the lentils are tender and the liquid achieves a thick consistency. Recipes makes about 8 cups of sauce. Nutrition information is a rough estimate for one cup of sauce.

We use cookies on our website to give you the most relevant experience by remembering your preferences and repeat visits. By clicking “Accept All”, you consent to the use of ALL the cookies. However, you may visit "Cookie Settings" to provide a controlled consent.
Cookie SettingsAccept All
Manage consent

This website uses cookies to improve your experience while you navigate through the website. Out of these, the cookies that are categorized as necessary are stored on your browser as they are essential for the working of basic functionalities of the website. We also use third-party cookies that help us analyze and understand how you use this website. These cookies will be stored in your browser only with your consent. You also have the option to opt-out of these cookies. But opting out of some of these cookies may affect your browsing experience.
Necessary Always Enabled
Necessary cookies are absolutely essential for the website to function properly. These cookies ensure basic functionalities and security features of the website, anonymously.
Functional
Functional cookies help to perform certain functionalities like sharing the content of the website on social media platforms, collect feedbacks, and other third-party features.
Performance
Performance cookies are used to understand and analyze the key performance indexes of the website which helps in delivering a better user experience for the visitors.
Analytics
Analytical cookies are used to understand how visitors interact with the website. These cookies help provide information on metrics the number of visitors, bounce rate, traffic source, etc.
Advertisement
Advertisement cookies are used to provide visitors with relevant ads and marketing campaigns. These cookies track visitors across websites and collect information to provide customized ads.
Others
Other uncategorized cookies are those that are being analyzed and have not been classified into a category as yet.
SAVE & ACCEPT