This rice cooker pasta and veggies recipe is a tasty vegan and gluten free version of American Goulash made with minimal effort and simple ingredients.

Sometimes you just want to get dinner on the table. I rely on this Rice Cooker Pasta and Veggies recipe when my schedule is overloaded. It’s a tasty meal you can make with minimal effort and it’s easy to keep the ingredients on hand.

My Version of American Goulash

American Goulash is one of the first meals I learned to prepare as a young adult. You brown some ground beef, add pasta sauce, cooked pasta and mixed veggies – stir it all together and voila – you have a meal!

Naturally I gravitated to making a plant-based version of American Goulash when I began experimenting with rice cooker pasta.

Why a rice cooker? Because you can toss in the ingredients and practically forget about them!

I find this simple combination just as satisfying as the original meat laden version. However, if you really have a yen for a meaty texture you could try adding some cooked lentils to the dish. I’ve been known to add left over lentil taco “meat.” Apparently I have no respect for the ethnic boundaries of cuisine. I say all is fair in the pursuit of a quick and tasty meal. 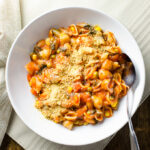 This recipe was made in a 20 cup rice cooker. Nutrition information is a rough estimate per serving—not including the vegan parmesan cheese.