Today is World Chocolate Day. So it’s only right that I share a homemade version of my favorite chocolate fix. I like to keep chocolate covered raisins in the freezer to snack on. They are the perfect guilty pleasure because you can eat one at a time.

Then I decided to get really brave and try making my own chocolate covered raisins. I was surprised by how easy it is!

You melt the cocoa butter in the microwave. Then you whisk in the other ingredients until you have smooth creamy chocolate.

Next, you add the raisins and stir until they are coated with chocolate.

Then you spread the coated raisins on a parchment lined baking sheet and pop them in the fridge.

Once set, you can break them apart and voila - you have homemade chocolate covered raisins!

I recommend keeping them in the freezer to make them extra chewy and delicious! 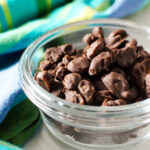 Homemade chocolate recipe adapted from Minimalist Baker. Serving size is about ¼ cup. Nutrition information is a rough estimate per serving.